With an upcoming three day weekend in early February I checked Skyscanner (similar to Travelocity only for Europe) and looked for the least expensive flights. London was by far the least expensive on an airline called Wizz Air (a Hungarian airline) plus it was a direct three hour flight. We flew into Luton Airport which is an hour and 40 minute train ride from the center of London. Luton is where most of the discount airlines fly in and out of.

The price of the flight was great but the downside is the long train ride into the city.

The next day we went to the charming Covent Gardens area to meet up for a free walking tour. We had breakfast before meeting the tour and the bill was 38 pounds ($50) for a relatively small meal. Yikes! It might be inexpensive to fly to London but it is very expensive in most other ways. 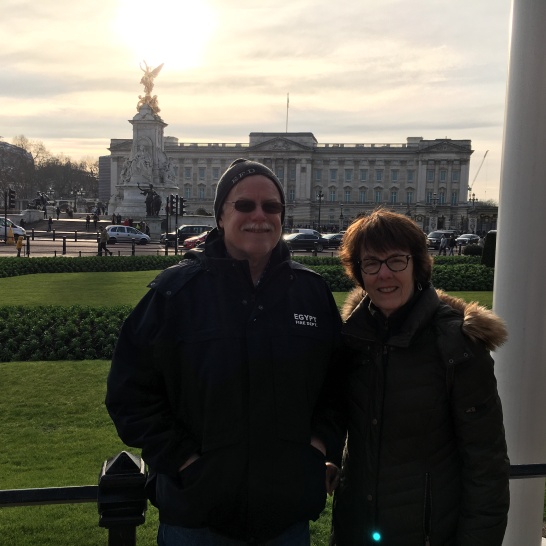 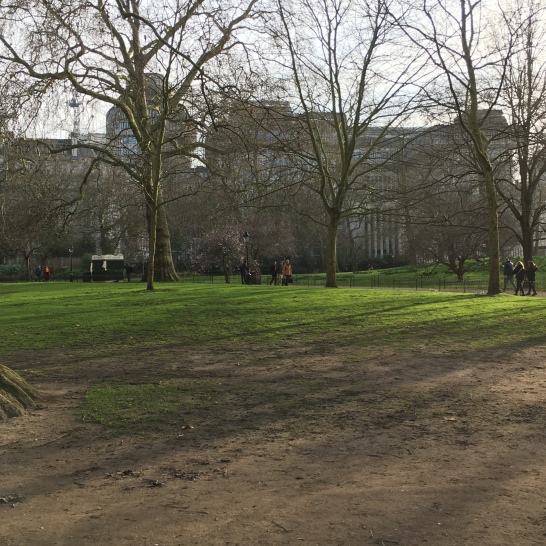 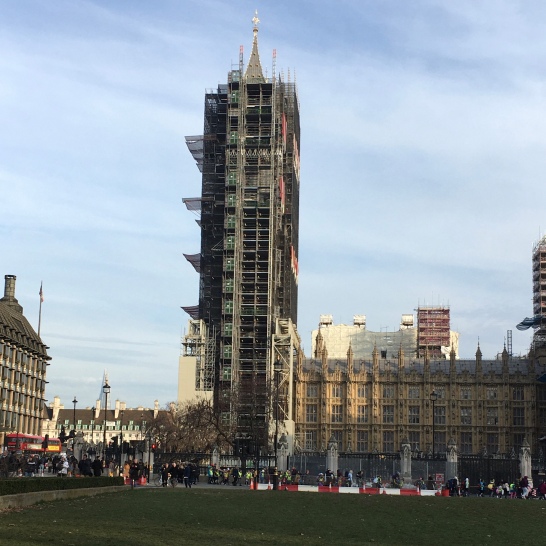 Trafalgar Square, Buckingham Palace, St. James Park, the London Eye, Westminister Abbey and Big Ben (with scaffolding) were a few of the places that we saw on our free walking tour. 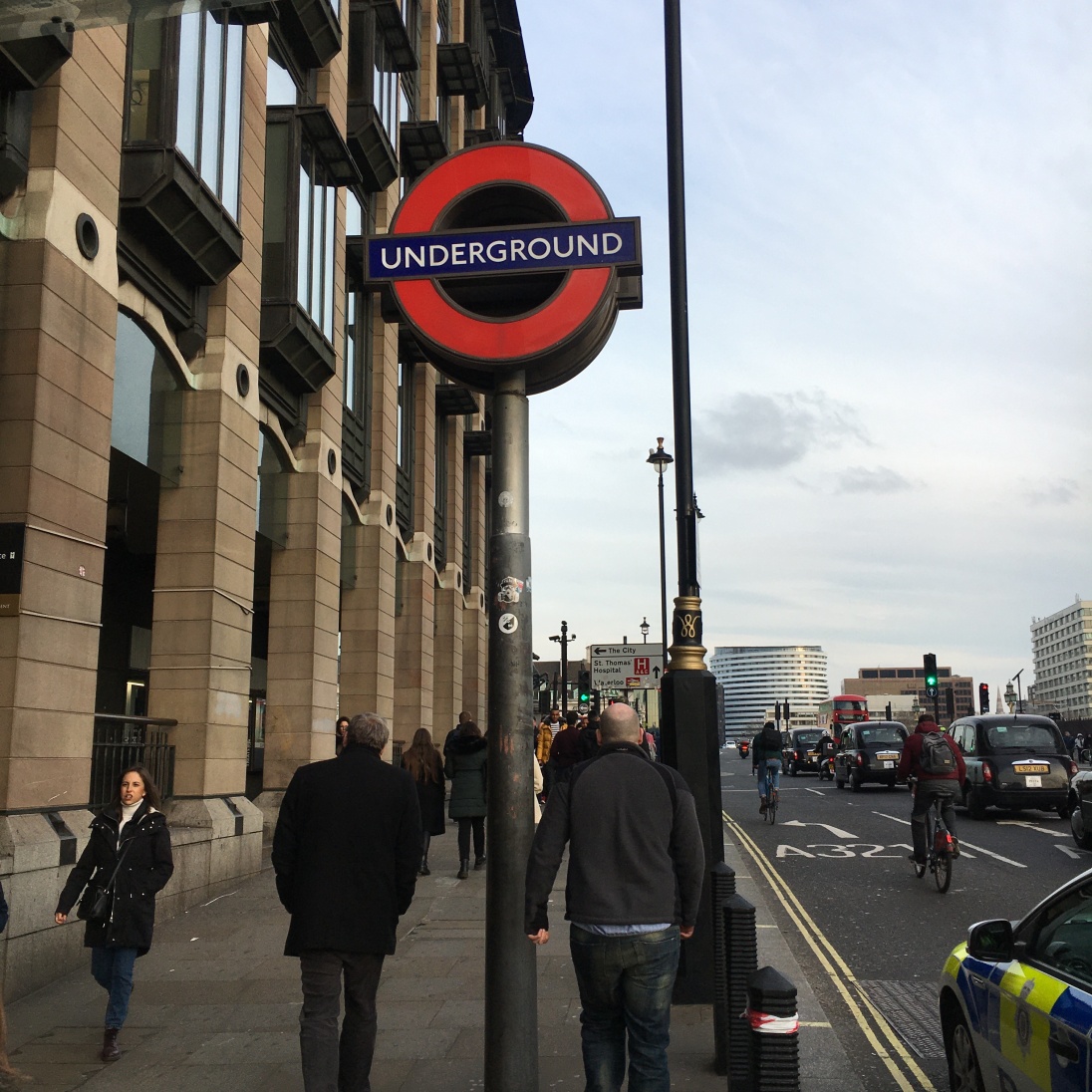 We used the Underground to get around London. It was easy and economical. I snapped the picture of the Way Out (instead of Exit) and Mind the Gap signs because it seemed so English. 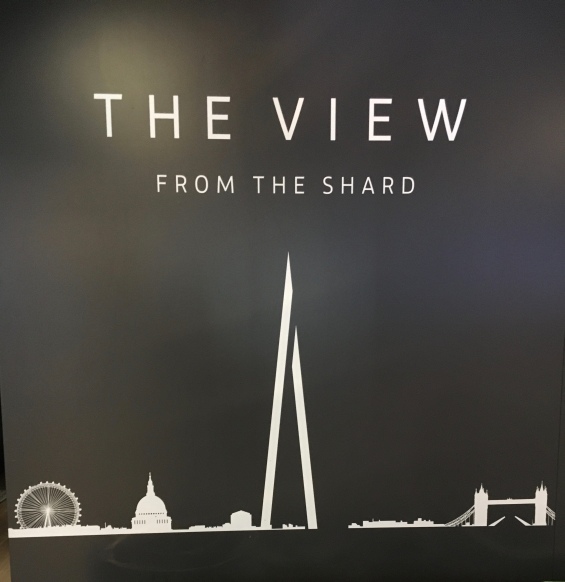 That evening we went to the top of the Shard. The building was built in 2012 and at 95 stories it is the tallest building in the United Kingdom.

I cannot take credit for taking this picture but I am adding it to my blog because I think it captures the size of this building.

Our view from the top…

The next morning I ran over this bridge (crossing the Thames River) to St. Paul’s Cathedral where Princess Diana and Prince Charles were married. 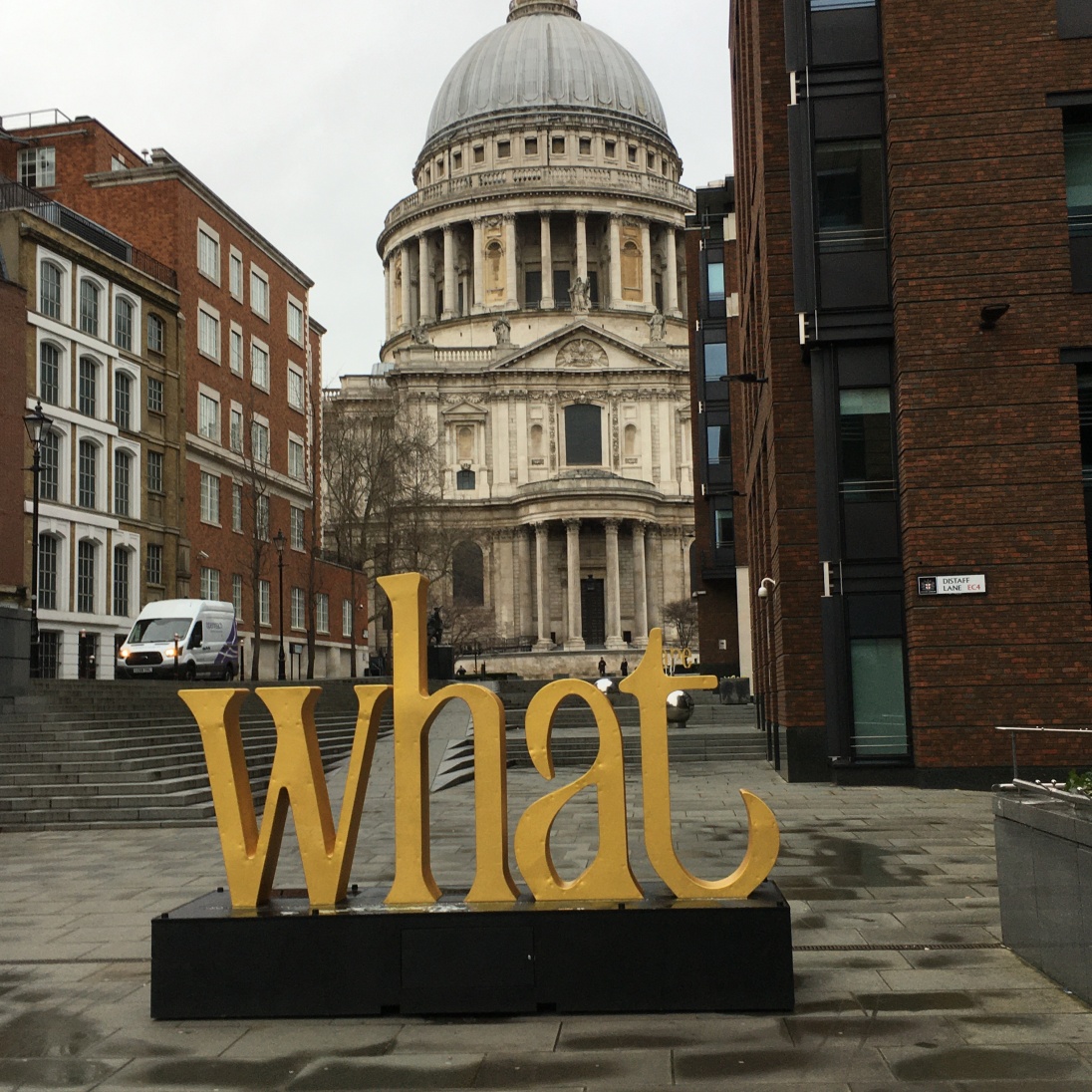 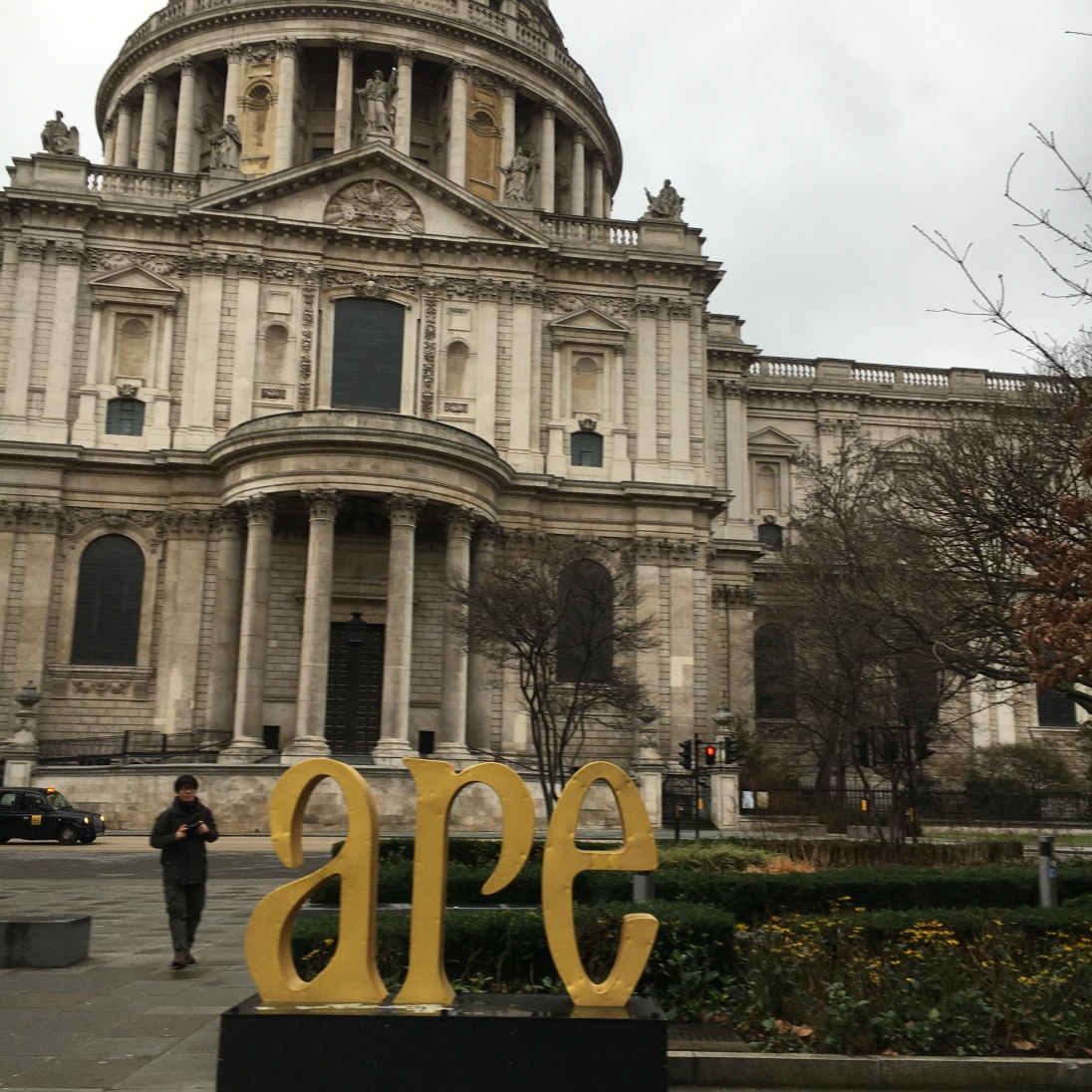 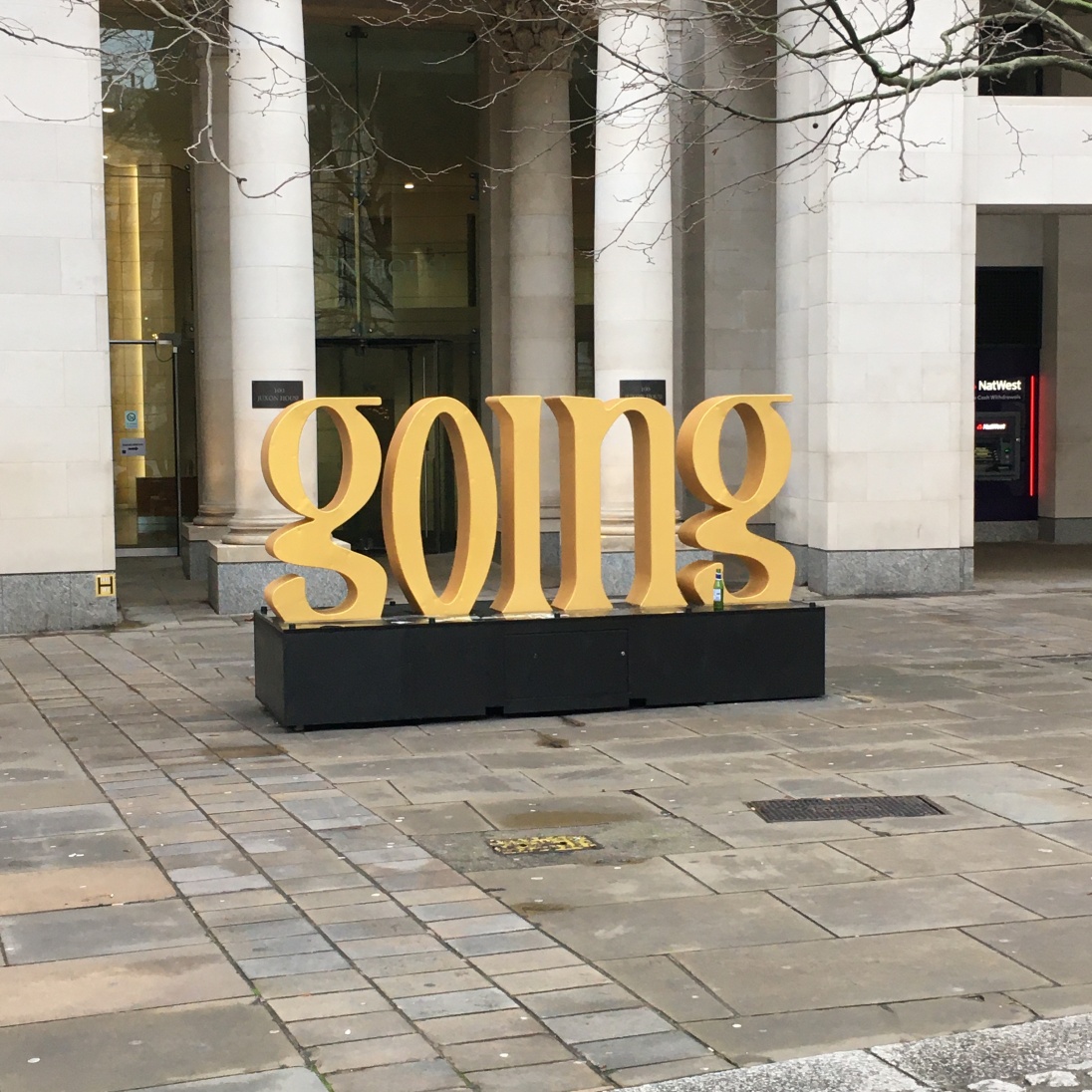 As I was running around the outside of the Cathedral I came across this progression of signs. I never could found where it went after the word “to”. 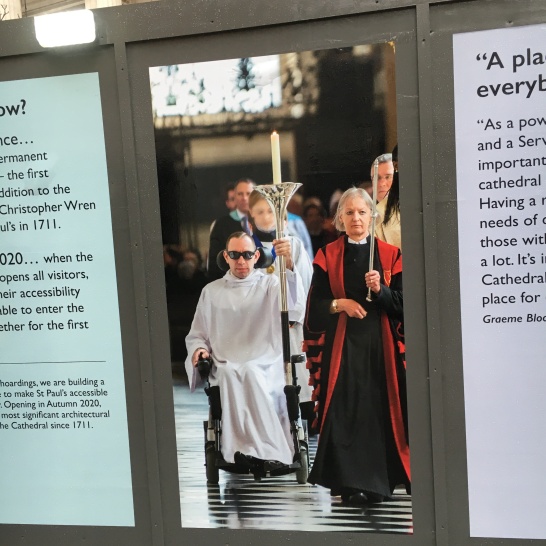 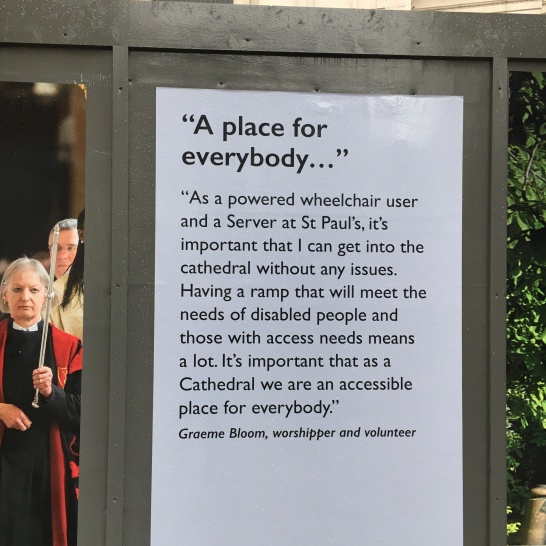 St. Paul’s is undergoing some construction to add ramps into the sanctuary allowing the church to be more accessible for all. Yay! Seeing this construction made me proud to be an Episcopalian. 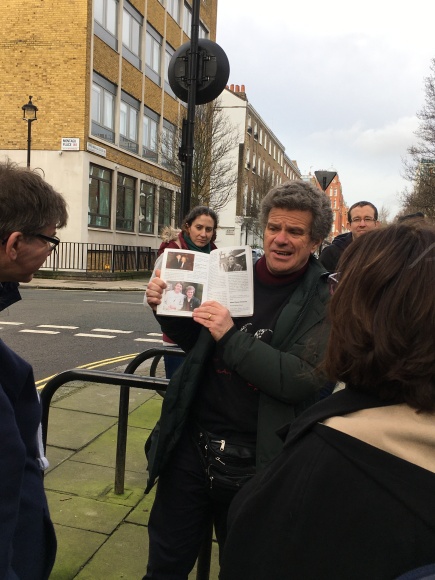 If you were to look at Randy’s playlist on his phone you would notice that 90% of the music he listens to is by the Beatles. We decided to take a tour that showed us where John and Ringo lived, the place where Paul and Ringo were married and a few other Beatles landmarks.

Abbey Road was probably the most iconic Beatles spot we visited. We were not brave enough to go out in traffic to take a picture but I did get a picture of Randy on the sidewalk next to Abbey Road.

Abbey Road Studio has been functioning as a recording studio since the 1930’s. The graffiti in front of the building is painted over monthly. 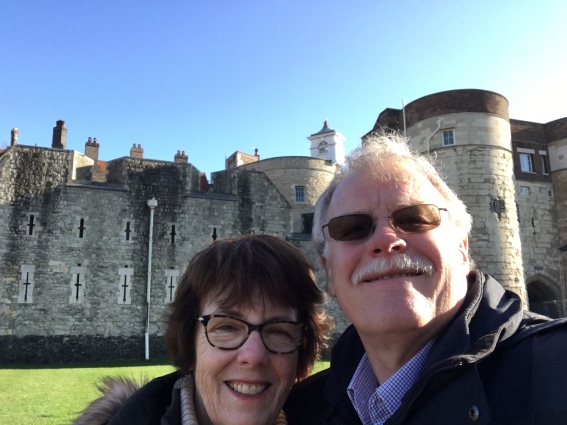 Now we have arrived at the Tower of London which was built in 1078 by William the Conqueror. Over the years the Tower has served as an armory, a royal palace, a prison, a menagerie, a treasury and Royal Mint. Currently it is the home of the Crown Jewels. 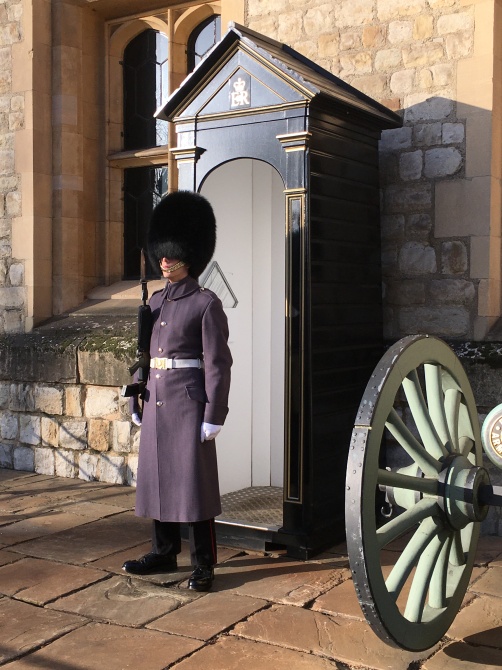 After touring the Tower we took a water bus down the Thames back to within walking distance of our hotel.

That evening we went to see the musical School of Rock. The theater was located on Drury Lane which made Randy and I smile since the college we went to had a main street with the same name. 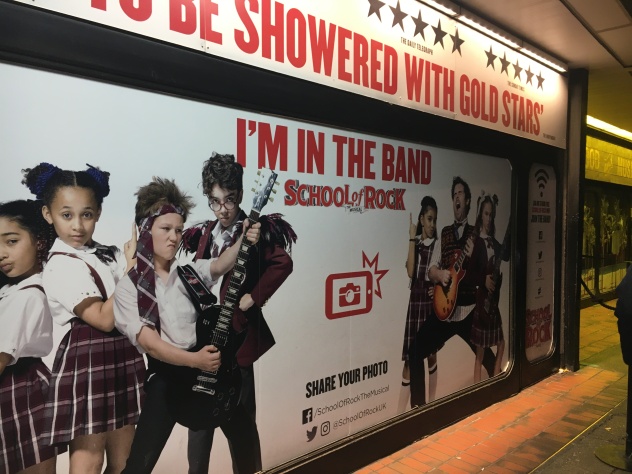 During the finale of the show they made an announcement that if the audience wanted to get their phones and record the finale they could do so. So Randy took this video. It highlights what fabulous instrumentalists these 9-12 year olds are in addition to being singers, dancers and actors. We REALLY enjoyed the show! 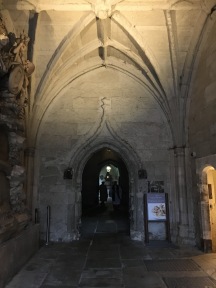 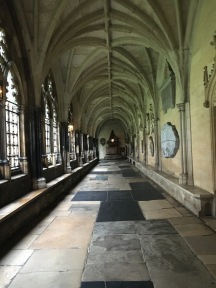 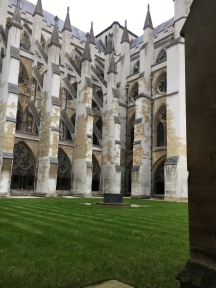 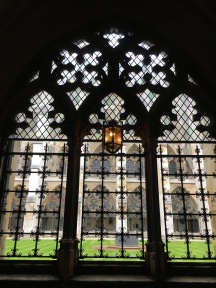 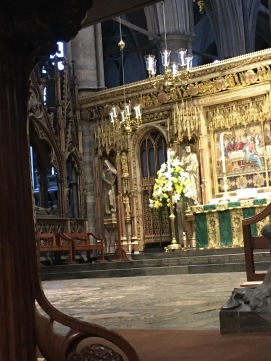 On Sunday morning we attended a Eucharist at Westminister Abbey.

We were scheduled to fly back to Tirana on Sunday afternoon however London was experiencing 80 mph winds. Trees were down on the train tracks and the buses were not running because of the bad weather. Our only option was to take a black taxi to the airport. It was horribly expensive but we had no other choice. Anyways, the one upside to the very expensive taxi ride was our delightful cabbie. Two years ago, along with three other cabbie friends, he decided that their job as cabbies was too sedentary. They decided to loose weight, get in shape and climb Mount Kilimanjaro, the highest mountain in Africa. Talking to him on the long taxi ride to the airport was SO interesting. Here is link to their accomplishment if you want to read more. Cabbies Do Kilimanjaro

Our quick trip to London was a wonderful way to spend a three day weekend. Someday we hope to go back and explore more of this part of the world that has so much to see.

Randy left for the States this morning. He is going home to deal with the taxes and will be back in Tirana in two weeks. We are looking forward to hosting several visitors over the next few months. Hoping and praying that the coronavirus does not cause problems with our guests’ travel plans.

4 thoughts on “A Long Weekend in London”